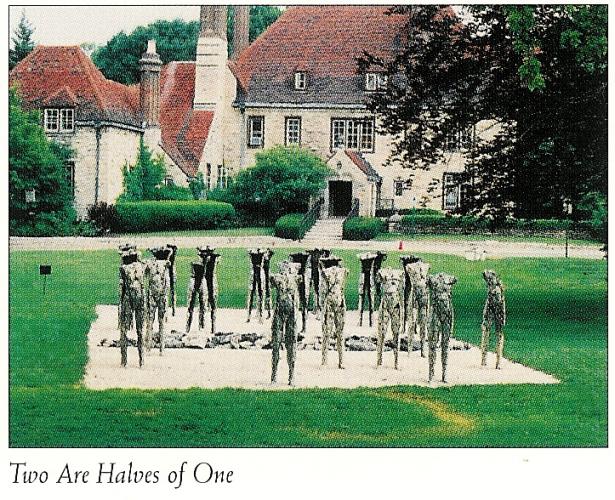 In the summer of 2001, Darrin Hallowell, an emerging Chicago-based artist and faculty member at the Evanston Art Center, created a site-specific installation on the Art Center's front lawn along Sheridan Road. Part of the ongoing Sculpture on the Grounds program, Hallowell's work, entitled Two Are Halves of One, included 25 life-size ﬁgures made of clay and steel, organized into two groups and installed on a 30-by-50-foot bed of limestone. Hallowell's work was a dramatic shift from past Sculpture on the Grounds projects that had been primarily architectural in nature.

Two Are Halves of One opened July 1, 2001, and was quickly embraced by community audiences. Viewers enjoyed touching and walking among the installation — acts encouraged by Hallowell. The artist's intent was that viewers would create both spatial and physical relationships between themselves and the figures, calling attention to human interrelationships and the viewers’ own personal histories. Hallowell also pushed viewers to consider notions of permanence and mortality by employing long-lasting materials in a symbolic manner: fired clay fragments were assembled over steel armatures in a mostly incomplete fashion, producing a look of constant decay and disintegration. 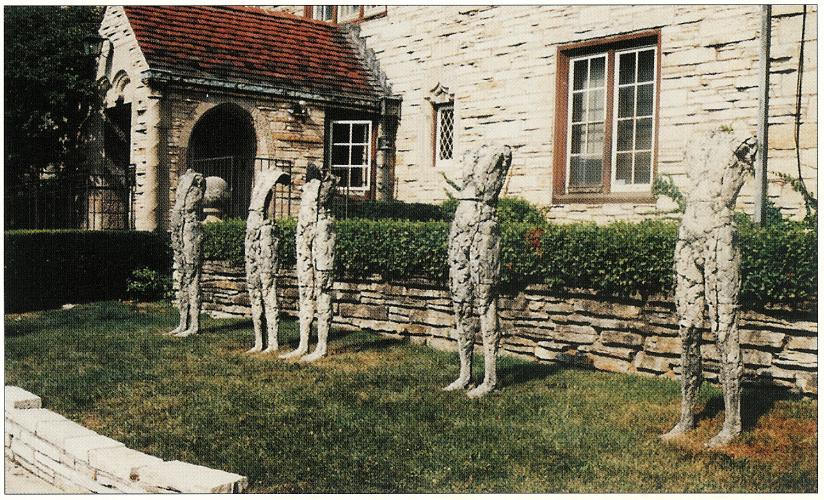 Viewers also made connections between the installation and archeological sites or military formations. And, after September 11, 2001, viewers (not all, but certainly many) saw the figures as "ghostly" or "charred." Some even saw them as victims or survivors of the terrorist attacks. lt was a shift in meaning, and yet the work hadn't changed, we had —or rather our context ,our frame of reference for viewing and experiencing the art had changed.

What might happen then if the artist took an active role in responding to the idea of context by rearranging elements of an older work, changing its physical setting? Hallowell decided to find out. 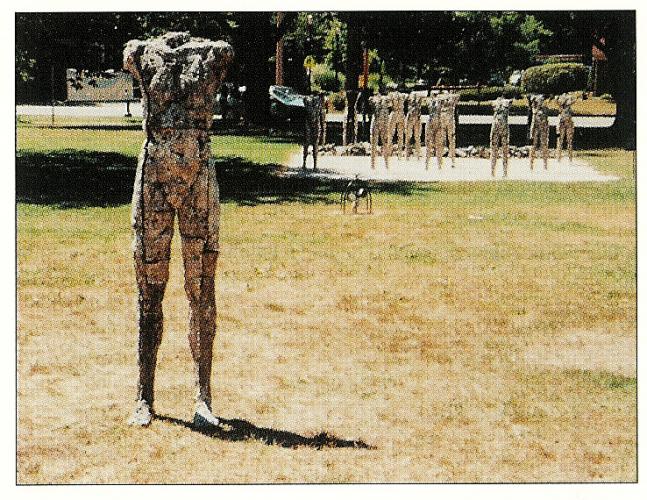 During an eight-week period in the summer of 2002, the artist began moving the figures from their original positions on the bed of limestone to new locations and into different groupings on the Art Center's grounds, altering the contextual aspect of the work. By gradually isolating the figures, Hallowell creates a more intimate environment and "dialogue" between the viewer and the figure(s). ln this new setting, the viewer is challenged to revisit and reconsider the context that helps define the work — and themselves — further exploring the viewer's own issues surrounding the piece. The new work created was named Change of Place and is the Evanston Art Center's fifteenth Sculpture on the Grounds installation.

Change of Place is made possible in part by funding from the Illinois Arts Council, a state agency, and the Elizabeth F. Cheney Foundation, which has been funding the Sculpture on the Grounds projects since 1997.

Darrin Hallowell was born in Bangor, Maine in 1969. A resident of Chicago for the past 14 years, he earned his BFA from The School of the Art Institute of Chicago in 1993 and has been teaching metal sculpture for the Evanston Art Center’s Art School since 1996. He has ’ been included in a number of group shows at venues such as The School of the Art Institute of Chicago, the Contemporary Art Workshop in Chicago, and the Evanston Art Center. Hallowell's work can also be seen through the Thomas McCormick Gallery, which represents him in Chicago, and at EVO Gallery, which represents him in Santa Fe, New Mexico. In the summer of 2000, Hallowell was commissioned by Art Enterprises, a private art collection based in Chicago, to create a series of works which were shown at the McCormick Gallery as Men at Work; Darrin Hallowell, John Henry, and Barry Tinsley. In the summer of 2001, Hallowell created Two Are Halves of One for the Evanston Art Centers Sculpture on the Grounds program.

Hallowell started his career as a painter. However, he wanted his work to have more "permanence," so he shifted to metal sculpting. He found that in much of that work he needed to use a foundry — which was expensive. Working with clay, he determined, would free him of the dependence on the foundry, yet give him the level of permanence that he was seeking. In addition to his primary work in clay, he continues to produce evocative drawings and mono-prints based on the figure.

THE SCULPTURE ON THE GROUNDS PROGRAM

The Evanston Art Center's innovative Sculpture on the Grounds program, inaugurated in 1994, has presented the work of 14 artists to date, encouraging them to create unique, site-specific temporary installations on the front lawn of the Art Center. The program is designed to take full advantage of the Art Center's unique setting; Lighthouse Landing Park is, in effect, the front lawn, Grosse Point Lighthouse, a much-visited, national historic landmark, is the neighbor to the south, the backyard and grounds were designed by the revered landscape architect lens Jensen, and just beyond the backyard is a public beach and Lake Michigan. In addition, the highly traveled Sheridan Road borders the front lawn of the Art Center. All these factors make the setting an especially appropriate site for the presentation of new and exciting artwork to a large and diverse audience. Previous artists have included Larry Paul King from Evanston; Roy Staab from Wisconsin, Patrick Dougherty from North Carolina, John Ruppert from Maryland, Robin Barcus and Eduardo De Soignie from Chicago, Robert Sprachman from Canada; and Herb Parker from South Carolina.

Since 1997, the Illinois Arts Council, a state agency, and the Elizabeth F. Cheney Foundation has been an important part of the funding package that has made these commissions of ambitious, new work possible.