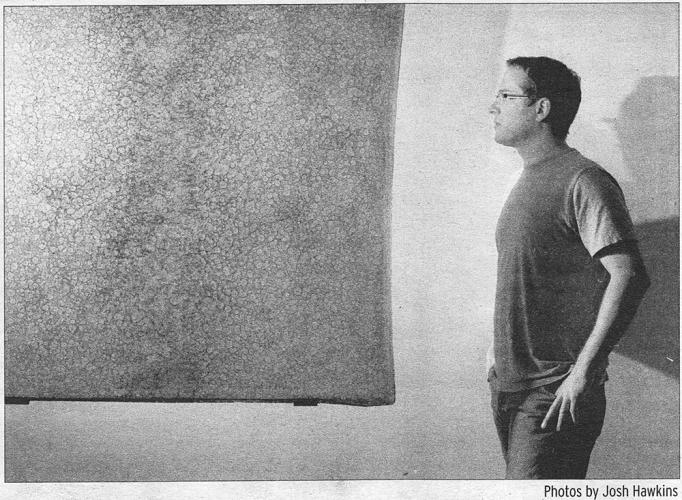 In the art world, artists often put themselves into their work, but Darrin Hallowell takes it to an extreme. The artist’s own blood is as integral as the steel, clay, and cloth that make up the pieces in his show, “Ariadne’s Clew.” The show, which is at the Thomas McCormick Gallery, 835 W. Washington, is structured around the idea of the human body as a vessel, its histories, and its more symbolic manifestations.

Hallowell hails from Maine, and came to Chicago to study at the School of the Art Institute. It was there that he ﬁrst got into working with sculpture, after arriving with the intention of focusing on painting. “We’d just sit in class and paint, and I thought ‘I don’t have to go to school for this,’ so I took a lot of different types of classes,” he says. It was in the foundry at the Art Institute that he ﬁrst discovered metal work and sculpture. The foundry is where metals are melted down to a molten liquid, and then poured and worked into different forms.

Hallowell’s pieces are typically large works that take time and craftsmanship to create. He works with clay, steel, lead, cloth, iron oxide, resins, and of course, his own blood to make sculptures. The pieces are as visually interesting as it is stimulating to hear him talk about his inspirations for them.

One piece titled, “Manifest (Thimble Rig)” was created after learning that his friend had a tumor growing in his head since he was a teenager. It consists of four metal torsos made of lead hung on the wall, and a ball of blood and resin about the size of a bowling ball sitting on the ﬂoor beneath.

To the right, is a pile of clay hands dusted in dark red iron oxide. They draw on the idea that some of the ﬁrst recorded artworks were cave paintings of a person’s hand. “It’s almost a universal phenomenon of these prints where someone just put their hand on the wall, and blew iron oxide around it,” he says of his inspiration for “Self Portrait, Chauvet II.” “I saw some images of these, and realized it was from 35,000 years ago. Here's this person who did this piece, this perfect self portrait, that’s just kind of like ‘I am here.”

In the center of the gallery’s front room are two armless, headless statues made out of clay and steel. After being fired in the kiln, the steel becomes black and burnt while the clay becomes white and cracked. The two people look like they are striding forward while decaying with time so that you can see their insides. The marriage of the interior and exterior of people is another theme of the show. The pieces show both in a way that forces viewers to examine both parts in themselves.

In the back room of the gallery sits another large piece of work made of cloth. A white funnel hangs in the air; pouring fabric dyed with iron oxide into the open head of a body lying on the ﬂoor. Another body hangs upside down in the air to the right, and pours the same dyed cloth out on to the ﬂoor. “It’s all based on these human patterns that are always repeating," he said. “That simple basic truth is what I'm really going for."

Two of the most intriguing pieces in the show are “Bloom 2” and “Bloom 3" that were created using resin and blood. They appear to be made of reddish brown glass from a distance, and up close they reveal highly detailed spatter marks. They are not framed, and the edges curl back in a way that makes them more like a sculpture than a painting. They are dark red and made from hundreds. if not thousands of drops of blood. In some places the drops are clean and circular; while in others they overlap and combine to create deep red patches against the translucent surface. “There are all these things happening, like looking at satellite photos of the rainforest. lt's just drop after drop, until it becomes this,” he explained.

Hallowell is attracted to the randomness associated with working on pieces like this, pointing out it can be done over and over and each time will be different. It is hard to control the process, so the work will turn out vary based on the circumstances that were present when the piece was being made. There is a lot of guess and check and research put into the process for each piece. “The ideas I have keep getting bigger in scale, so I might have to start doing some grant writing," he said with a laugh. His future plans include making a pair of hands like those in Chauvet II for every generation going back to those original cave paintings 35,000 years ago, as well as more fabric pieces that are large enough to ﬁll a room.