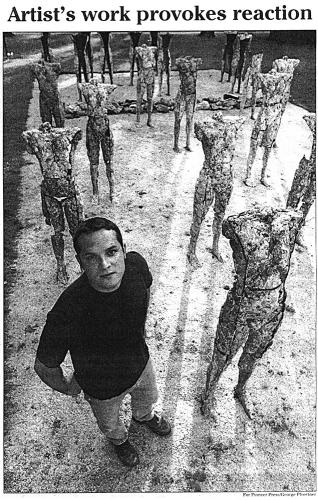 Artist Darrin Hallowell watched from the corner of his eye as a young woman approached one of his life-size clay and steel ﬁgures on the lawn at the Evanston An Center. She wandered among the 25 headless ﬁgures arranged in neat rows  on a gravel surface, and peered at the mottled clay torsos,  the exposed steel frames, taking in the group‘s stark geometry. Hallowell introduced himself to the curious woman, Kathy English, who was just passing by on an evening walk but found herself compelled to slow down for a second look at the rows of ﬁgures. The forms, she told the artist, reminded her of soldiers in the Korean War Memorial in Washington, D.C., and the conﬁguration invoked an exhibit at the Holocaust Museum. Hallowell was delighted by the company — and the comparisons. He said he intentionally kept the ﬁgures in his installation abstract, allowing viewers to create their own understandings of the work as they experience it for themselves. “I want  people to walk through it,” said Hallowell, a faculty member in the metallurgy department at the Evanston Art Center. “I hope people will bring their own ideas to it."

Hallowell created the installation, titled “Two Are Halves of One," for the center‘s Sculpture on the Grounds series. The work will be on view until spring 2002. Peter Gordon, the center’s director, said the EAC Exhibition Committee chose Hallowell’s work partly because his work—in both themes and materials—diverged from many previous Sculpture on the Grounds installations. “We wanted to move away from architectually based pieces and those made of natural materials." he explained. “The committee felt Darrin had a very strong proposal, he was an area artist, and we were looking for a figurative piece." Gordon also stressed that because Darrin is a faculty member at the Art Center, “We knew the strength and potential of Darrin‘s art."

While Hallowell, a graduate of the School of the Art Institute of Chicago, has created ﬁgures for private galleries, he is excited to see his work exhibited in such an informal and public setting, visible and accessible to anybody walking or driving by on Sheridan Road. And he wants passerby to step off the grass and into his installation, to interact with the forms, ﬁrst-hand. A sign stationed near the exhibit, Hallowell’s ﬁrst public commission, says as much, encouraging people to walk among the ﬁgures (but not to touch or lean on them because the force could damage them) “I think we're all so used to being yelled at by museum guards,” said Hallowell, about people's initial hesitation to breach the installation’s gravel border. “One thing that drew me to sculpture is it can be in your own space.” English agreed that the installation of ﬁgures “just makes you want to walk through it,” and during  the course of an hour, several more passerbys seemed to share her  opinion, walking through and exploring without much trepidation. Hallowell’s work gives the viewer an inside look into the creative process, with the backs of each ﬁgure open to reveal the steel armature holding the sections of clay together “like a big puzzle,” as he described it. “I’m interested in keeping the process visible,” said Hallowell, pointing out where the steel rods enter the ﬁve or six pieces that make up ﬁgures’ feet, legs and torsos.

Beginning last February, Hallowell and two assistants from the Art Institute of Chicago created  each ﬁgure from an original mold, pressing a special non-cracking clay, which he developed himself, into the form. After extracting the clay, in sections, he ﬁred the pieces in a kiln, connecting them with a welded steel frame. In June, Hallowell transported each of the 25 ﬁgures from his Lincoln Square studio to the center’s lawn, arranging them in two separate groups, one on each side of a pile of broken clay fragments, facing away from shattered clay legs, chests, feet.  While the ﬁgures all come from a common mold,  they are not carbon copies of the original, marked as individuals not only by the processes of ﬁring and welding, but also by the creative decisions — where to make a seam between pieces, for example — made by Hallowell during assembly.  “Each ﬁgure has a bit of individuality but they can be read as general people-as an ’every person,”’ he said.

Hallowell sees his installation as expressing a number of dichotomies inherent in human nature. In the contrast between the hollow, exposed back and the solid clay chest and shins on the front of each ﬁgure, Hallowell expresses a kind of psychological dichotomy-between the self we show others; and the self we keep hidden inside us. “It’s a duality— what you put forth and what you hold back,” said Hallowell. Hallowell also sees the ﬁgures-made of durable materials but “in a state of almost falling apart"- as illustrating the tension between “permanence and decay,” he said. Standing with their backs to the clay fragments, the ﬁgures-in what Hallowell termed a “literal interpretation”- are “facing away from their history, their mortality.” Whatever his own interpretations of his work, Hallowell left his work deliberately “ambiguous,” to allow viewers to fashion their own readings. That is why he made no heads or arms — just enough to “get the body language across,” he said. “When you get. heads and faces,” he said, “you start reading expressions as opposed to just body language.”