Pasatiempo. Man And His Symbols. 2005 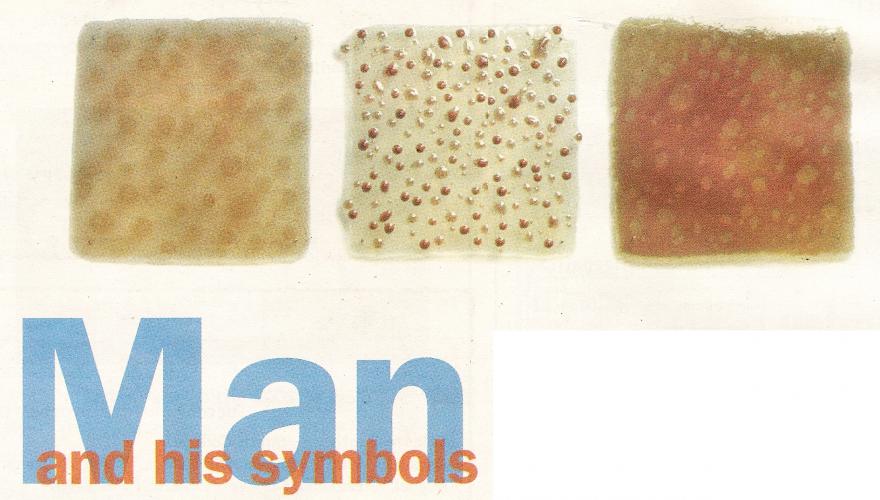 Monuments dot parks and public squares around the world. Whether they take the form of a hero on horseback, a pyramid, or a giant stone god or king, those who commissioned these grand gestures must have believed that future generations would understand what they symbolized.

Though building monuments seems a universal impulse, today many sculptors question the premise that underlies large-scale commemoration. And some, Darrin Hallowell among them, question the value of sculpture designed for installation in a distant location the artist knows little about. For him, a sculptures physical setting and the life experiences of its audience are intrinsic parts of any work of art. And life,  he believes,  is ﬁlled with events, both small and catastrophic, that can change the meanings of symbols in an instant.

In the summer of 2001. Hallowell installed a site-specific installation, Two Are Halves of One, on the rounds of the Evanston Art Center in Illinois. Comprising  25 life-size,  fragmented, and hollow ﬁgures. The work was intended to push viewers to examine their assumptions about permanence and their attitudes toward and relationships with other people. Hallowell hoped each person's experience of the work would be colored by his or her life, but he was shocked at how intense that reaction would become, he said by phone from his Chicago studio.

“After 9/1 I , the art center was ﬂooded with calls from people who thought the piece was created  speciﬁcally in memory of that and wanted to know how it got up so ﬁrst and people who were struck that now they were thinking about the work in a different way.“ he said. “The piece  hadn‘t changed at all —people’s perceptions had changed.”

That a work not intended as a monument had become one and had touched people in ways he had not foreseen conﬁrmed and sharpened Hallowell‘s thinking. “I had an idea that the audience was a set constant.‘ he said. “But now l think that people's attitudes really change, not only in what they can handle visually but in what they want to see.“

Before Sept. l l, 2001, Hallowell had noticed graphically disturbing photographs of car and train wrecks at international art fairs, but after the terror attacks of that day, such photographs were no longer displayed.

Although the meaning of many symbols can shift markedly and rapidly. Hallowell is convinced that universal. human experiences retain their meaning for each generation. Hallowell recalled how he and his wife spent an evening looking at his grandmothers decades-old photos after spending the day exploring a beach near her home. The pictures ' depicted his grandmother and her friends on the same beach — the trees were a little smaller. but Hallowell recognized the emotions evident in their expressions.

‘Good art speaks to those truths,“ Hallowell said. “I think that the fractured-like quality and the puzzle-like pieces that I put together are a visual representation of those patterns that everyone feels throughout life.“

The sculpture in Darrin Hallowell: Bred in the Bones at Evo Gallery through July 3 reﬂects the artist’s seemingly contradictory beliefs in the transitory nature of symbols and the universal quality of many human experiences. Two weeks before the show’s opening, Hallowell had shipped most of the works, but he hadn’t photographed them; for him, they would not be complete until they were installed. And although he had a general idea of how the installation would look, part of the point of his work is accepting  the possibility that it will change in response to a new Space.

At one point during  the planning of the show, Hallowell had proposed a sculpture that would change radically in the first few days after its installation. Many of his works are made of fired ceramic, and he contemplated making a life-size, unbaked figure and installing it in the gallery under running water and videotaping its transformation from full-bodied form to stainless-steel armature. But Hallowell instead installed the piece under a specially prepared sprinkler system in his studio, and Evo visitors see only the reduced body and a video showing how it got that way.

“The fact that some of my pieces fall apart is important,” Hallowell said. “Sculpture is coming from a tradition of being permanent and public, and that can be limiting in a lot of ways.”

The body — seen from inside and outside, fractured and patched together, vessel-like, filled or empty — is the theme of the show. In his work Shell Game, five lead torsos and a ball made of resin and the artist’s blood express Hallowell’s exasperation upon hearing about a friend’s cancer diagnosis. Primary Vessels uses India ink and salt to fill two body shaped containers. ‘Ink represents water to Hallowell and, mixed  with salt, can make the primordial ooze from which all life has sprung. But in Primary Vessels ink and salt are separate, and the piece can be interpreted as being about either barrenness or fertility, Hallowell said: “I like the ambiguity of it. I almost hate to say what I was thinking when I made a piece. I know that people bring their own ideas.”

Hallowell is quick to embrace the associations others suggest. When asked if Cloth Figure, Funnel 1 has anything to do with ancient bodies preserved in bogs, he said it didn’t but agreed the wrinkled fabric does look like millennia-old skin preserved in peat. Hallowell said he has never heard a wrong or silly interpretation of his work, but it disturbs him when people don’t give his sculpture enough thought or time to make associations. “It’s a visual language,” Hallowell said. “Even in spoken language, you don’t always get your point across. There’s a real art to being able to state exactly what you mean. You put it out there -—but it’s open to interpretation. I think you are setting yourself up for a fall if you don’t accept that.”